Brian Duke, 81, is the first person in Frimley Health and Care to receive the COVID-19 vaccine through a GP-led service

The rollout of the COVID-19 vaccine into communities within Frimley Health and Care has been welcomed by local people.

Patients in Yateley were the first in the area to receive the Pfizer BioNTech vaccine when the local service went live on Tuesday, December 15.

The retired engineer surveyor has been missing seeing his grandchildren – three of whom live locally but three others live on the Isle of Wight. He said: “I live on my own and I have spent a lot of time indoors and I’ve been very careful when I’ve gone out shopping.

“It has been a bit difficult and you don’t know what’s going to happen next so you can’t really plan for anything.”

He said the arrival of the vaccine was “brilliant for everybody”. It’s particularly good for him, as his second dose, in early January, will be on his 82nd birthday.

Mrs Amor was very keen to have her injection. "Very much so,” she said, “Really because of the grandchildren. I have got two little one in London and two big ones in Australia, and there’s no way I can go anywhere near Australia at the moment.”

Mrs Amor, a distant relative of famed Russian author Leo Tolstoy and the aunt of British historian Nikolai Tolstoy, said she and her husband were fortunate to be able to enjoy their house and garden during the pandemic.

She praised the vaccination operation at the surgery, saying: “I’m absolutely amazed. This surgery has been brilliant in every aspect. The flu vaccine was like a military operation and so is this.

“It’s absolutely extraordinary. I expected to wait for months and months.” 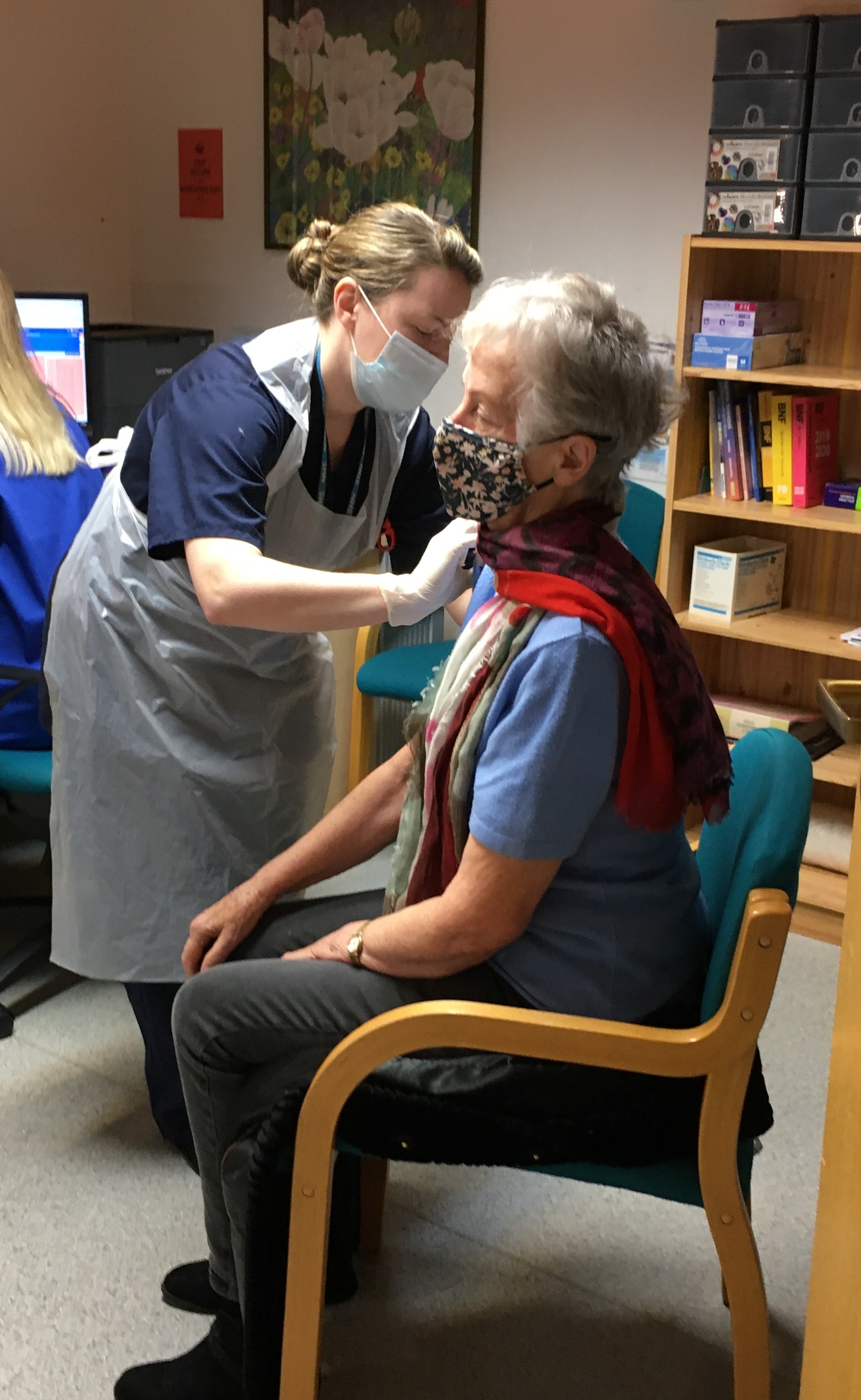 The vaccine was first delivered to patients nationally on December 8, through 'hospital hubs', as the specific requirements of keeping it at minus 70 degrees centigrade meant only acute hospitals had the necessary facilities.

Wexham Park Hospital, in Slough, is the hospital hub site for Frimley Health and Care and it is continuing to vaccinate front line health workers, care home staff and people over the age of 80.

Yateley is in Wave One of the rollout of vaccination services in communities, in which the vaccines are delivered by GP practices working together as Primary Care Networks.

Dr Gareth Robinson is Clinical Director of the Yateley Primary Care Network and a GP Partner at Oakley Health Group.

Following the launch, he said: "It has been a really good start and I’ve been really pleased with how the first hours have gone.

“We’ve had a full turnout, with groups of patients booked every 10 minutes. Patients have been really excited, from the point of being called up to book an appointment to coming along. They’re really enthusiastic and happy to be here and to have a glimpse of a more normal life in the future.

“For us it’s very exciting to be part of Wave One and to get to do this first. We’ve always been interested in looking at new ways of doing things so when I got a phone call asking if we were interested in going first we were delighted.”

He praised all those involved in the operation, from practice staff who had cancelled leave or were working in their time off, to the local volunteers acting as stewards and car parking attendants, to the local council, the neighbouring Waitrose supermarket which has devoted a large section of its car park for vaccination parking in the run up to Christmas, and he also thanked Frimley Health NHS Foundation Trust for its support with storing and transporting the vaccine.

“This has been a real joint effort, with a number of organisations working together,” he said."

After Yateley's vaccination rollout on Tuesday, residents over 80 in Slough and Surrey Heath began receiving their vaccines on Wednesday, December 16.

Health services are reminding people not to contact the NHS to arrange an appointment but to wait until they are contacted. The national vaccination programme is the largest ever undertaken by the NHS and will take many months to complete.