Alongside the many kind words of thanks and appreciation our vaccination teams are receiving from their patients, we've been getting plaudits from the very top.

The Duke wanted to congratulate everyone concerned with the success of the programme so far and to discuss the pandemic in general, with its impact on mental health and the isolating effect it has had, particularly for older people.

Dr Robinson, who is a Senior Partner at Yateley GP Practice Oakley Health Group and is the Clinical Director of the Yateley Primary Care Network, said: It was a privilege to be able to tell the Duke of Cambridge about the amazing efforts being made locally by the whole community to vaccinate our vulnerable patients as quickly as possible.

"He was very interested to hear about the setup we have in Yateley. We also talked about the effect that the pandemic was having on peoples mental health and how local patients  have faced the challenges brought about by shielding and isolation.

"It was a real boost in moral for the whole practice team and volunteers to know that he was interested in the vaccine roll-out process.” 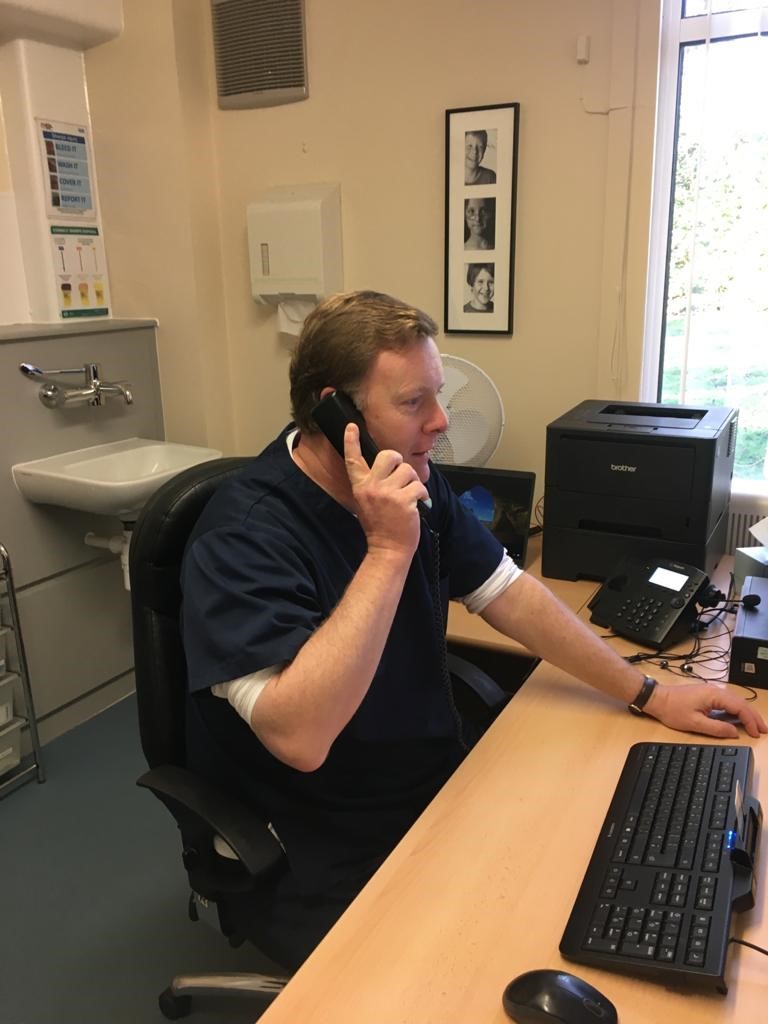 Dr Gareth Robinson on the phone to the Duke of Cambridge

The buzz from the Duke's call had barely settled down again when the team were asked whether a number of them would be willing to share a video call with Secretary of State for Health and Social Care, Matt Hancock.

Mr Hancock specifically asked whether a volunteer representative could be involved and Sue Vincent, from Hart Voluntary Action, who has been instrumental in coordinating the volunteer response in Yateley, joined the call. Sue, Gareth Robinson, Lead nurse Mel Bott and Practice Manager Jennie Taylor all spoke with Mr Hancock.

Just hours later the Secretary of State led the national daily coronavirus briefing at Number 10, in which he paid tribute to volunteers for what they have been doing to support the vaccination programme.

Also during the briefing, in response to a journalist’s question about vaccine take-up, he said: “I was talking to a group of doctors and their team in Yateley in Hampshire today, where they’ve reached 98% of all the over 80s locally, who have been vaccinated.

"That is a fantastic level of take-up and they’re continuing to offer the jab to the 2% who haven’t got there yet." 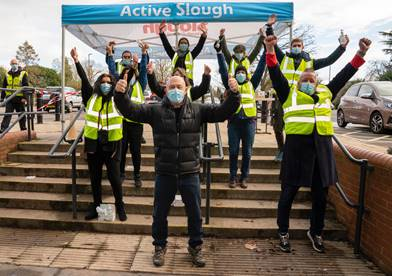 From the Palace to the Queen Vic:

A soap star - turned documentary maker visited a vaccination centre in Slough to promote the work being done by volunteers and to thank them for what they are doing to support the vaccination programme.

Ross Kemp, aka Grant MItchell from Eastenders, wanted to highlight how important the selfless, unpaid workers were to the success of the vaccine delivery.

Ross, who lives near Maidenhead, spoke to volunteers, vaccinators and patients during his visit to the Salt Hill site. His visit featured in the national broadcast and print media.

You can watch his visit on the Lorraine show here and read about it here.